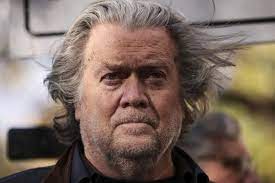 A Man With Answers? Sure. Uh huh. Right. BTW, Steve, soap is available and cheap!

Sitting across from Steve Bannon on the corrupt, fascist, drunkard-like’s show, Matt Gaetz expressed concern that republicans might not be worthy if they regain power in future elections. It may be the first time this accused child molester has actually told a whole truth.

When I was a child, and even into adulthood, behaving like “child-men” who run around showing porno pics of the women they had casually banged would have made any politician a laughing stock. Having said that, this has only changed because of a spreading moral bankruptcy within the republican party where lies, hatred, and fecklessness are tied to a desire for power which must be causing these people deep itching in uncomfortable places. It’s hard to laugh at human beings who are so devoid of ethical concerns, and even harder to laugh at their lies and messages of hate and avarice.

As for Steve Bannon, he can pretend he’s a quiet Rush Limbaugh, but dishonesty, corruption, and a skewed version of conservatism that keeps everything but the conservative part is his legacy, just like the former misogynistic and hateful loudmouth. The one who ran an advertisement where the faces on Mt. Rushmore were all replaced with his own.

The fact that one has to reach into the backwoods of human behavior and pull out the troglodytes to appear on their show is evidence aplenty that their reality does not match the same one the rest of us exist in. In addition, Steve Bannon must be counting on the fact that he’s hiding behind a microphone, because when caught on camera he generally looks like he bathed last in 1966.

If this post seems unusually harsh, listen to what the subjects say when THEY open their foul and moronic mouths. I find nothing patriotic, conservative, forward thinking or even useful in anything they say. As for doing? Fuhgetaboutit! Matt Gaetz is only into one type of doing, and Steve Bannon can only break things, no matter what he does.

As for Boebert, Greene, Gohmert, and Gosar, a fitting name for a Sumerian demon, it would help them to remember that the USA they envision would look and behave a lot like them. Gosar is likely in a corner somewhere licking the walls, and the others are doing their unlevel best to share their bizarre lack of mental health, on platters of lies, Q”anon” craziness and blatant hatred for anything progressive and especially multicultural and inclusive.

Because people are busy, consider this our effort to open a few eyes with just over a few words. We have NO desire to live in a Boeberty, Gaetz-like, or Greene-type nation. Republicans may think breaking everything is a great idea, but who is going to fix what was broken? These creeps? As in the crazies who are breaking them? Or are they just the wrecking balls making way for the construction trucks to follow? Either way, these people will never lead us into any kind of a positive future. Remember Mike Flynn? Well this ex-general has a pet name for himself. Just call him General Mishka. (Also call him Mr. Kompromat)!

As for Bannon’s original complaint, about continuous spending being ongoing, I don’t recall a single complaint from him when the deficit was blown up because of more tax cuts for the rich. Investing in the middle class or families, however, suddenly the universe is going to stop, the Earth will melt, and the great experiment in spreading lies and hate will die. We definitely cannot have that.

In this lies the reason republicans have lost the ability to compromise. They have no vision for the future. They just want money and power right now, deserved or not.

This site uses Akismet to reduce spam. Learn how your comment data is processed.